Grown in super-small quantities, these four varieties are well worth the effort in seeking them out

While classic red wine varieties are what people often conjure when it comes to Napa Valley, a handful of producers are going against the grain and working with a particular passion to introduce consumers to lesser-known grapes, like Mondeuse, Albariño, Charbono and Barbera. Some of these grapes were as widespread in Napa Valley 100 years ago as Cabernet is today, while others have always been elusive, grown in the tiniest pockets of land.

For each of these winemakers, their gravitation to unconventional grapes is not economically driven. Intead, they are individually inspired by deeply personal sentiments—perhaps a desire to preserve Napa Valley’s rich history, a chance to educate consumers beyond the traditional or to share their love for a wine discovered on travels across the globe.

This grape is undoubtedly the rarest of them all, for there’s only one Napa Valley producer making it today. Stephen Lagier and Carole Meredith of Lagier Meredith planted Mondeuse vines on Mount Veeder in 2007, effectively bringing the variety back to California, where it was widespread in the 1800s.

Related to Syrah, this medium-bodied, light-colored red wine hails from France’s Savoie region and is known for its spice, floral characters and earthiness, but because Napa gets more heat, Lagier Meredith’s Mondeuse has more color and weight than what’s typical. “We knew the wines from the Savoie were really interesting, flavorful wines,” says Stephen Lagier, who admits that Mondeuse isn’t the easiest grape to work with.

“One of the challenges is it tends to be fairly productive in terms of yield, so you really need to thin it down aggressively to get it ripe. It takes a bit of work to make fine wine out of it.”

There were only five tons of this Italian red grape—which produces a high-acid wine showcasing dark fruits and earthiness—crushed in Napa Valley in 2018 and Calistoga’s Robert Biale Vineyards accounted for 1.5 tons of that. The vineyard’s proprietor, Robert Biale, sources it from the 100-year-old Gaudi Carli vineyard in Calistoga.

“It’s a variety that’s undervalued and underutilized,” says Biale, who grew up in Napa Valley and recalls drinking Barbera from Louis M. Martini Winery. “One of its best attributes is that it comes in at a lower alcohol naturally. It really reveals its best self because it retains its acidity. We don’t have to do anything to it and it’s fresh and pure.”

A longtime lover of aromatic white wines, when Peter Franus of Peter Franus Wine Company had the chance to work with the Spanish variety Albariño in 2009, he jumped at it, joining a very small club of Napa Valley vintners. “It’s in the vein of a Sauvignon Blanc and a Pinot Grigio, but it has its own characteristics of citrus and an almond note with great acidity,” Franus says.

Franus’ Albariño comes from the Stewart Vineyard in Los Carneros. Most California Albariño is grown in the Central Coast area, but this vineyard has a special X-factor that makes the growing conditions more similar to the terroir of Spain. “It’s surrounded by a levee, so there’s a bit of a saltwater infusion,” Franus says. “Famous Albariño in Spain grows near the sea, so this saline impact kind of mimics that.”

Andy Jones, winemaker for Vermeil Wines, describes this late-ripening, easy-drinking red grape as a cross between Syrah and Pinot Noir, with a deep color and medium body. Most famously produced by Inglenook for more than 100 years, Charbono was planted prominently throughout Napa Valley at the turn of the 20th century, but those vines have since almost entirely been replaced with other varieties. Today, only 45 acres of Charbono exist in Napa Valley. “People used to use Charbono as a blending varietal because it has that deep, dark depth to it,” Jones says.

Vermeil sources Charbono from Frediani Vineyard in Calistoga, where many of the 11.5 acres of vines are 85 years old. “I think it’s a pretty distinct varietal,” he says, “especially in today’s day and age where there’s nothing quite like it and it’s grown in such small areas and amounts.” 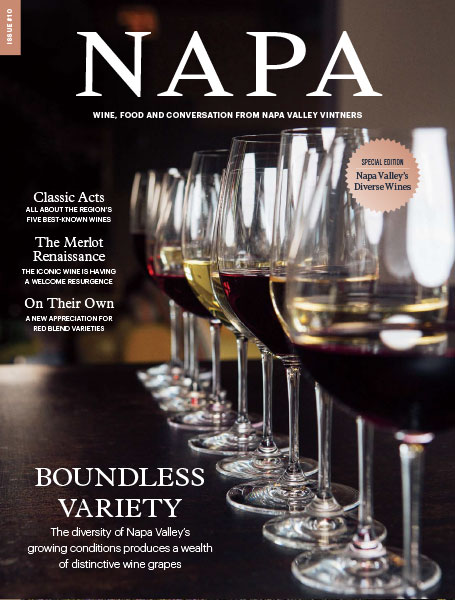 This article appears in NAPA Issue No. 10

Produced twice a year, NAPA Magazine is a publication focused on Napa Valley's local wine, local food, and local community. Get a glimpse into how the Napa Valley is cultivating excellence.

Subscribe to receive a free printed version of the magazine delivered to you biannually or find a location near you.